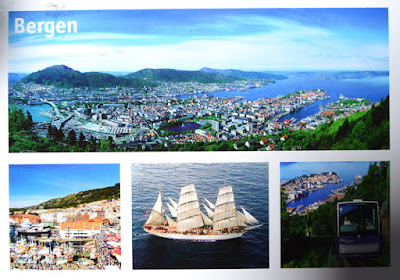 Received from: NorwayCategory: from family

Bergen, historically Bjørgvin, is a city and municipality in Hordaland on the west coast of Norway. At the end of the first quarter of 2017, the municipality's population was 280,221, and the Bergen metropolitan region has about 420,000 inhabitants. The municipality covers 465 square kilometres and is on the peninsula of Bergenshalvøyen. The city centre and northern neighbourhoods are on Byfjorden, 'the city fjord', and the city is surrounded by mountains; Bergen is known as the 'city of seven mountains'. Many of the extra-municipal suburbs are on islands.
Autor: polish.bot o 9:14 AM

Email ThisBlogThis!Share to TwitterShare to FacebookShare to Pinterest
Etykiety: from friends, Norway