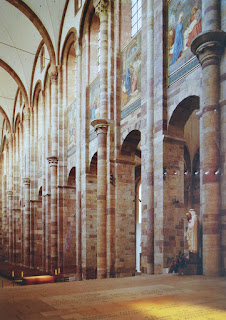 The Speyer Cathedral, officially the Imperial Cathedral Basilica of the Assumption and St Stephen, in Speyer, Germany, is the seat of the Roman Catholic Bishop of Speyer and is suffragan to the Archdiocese of Bamberg. The cathedral, which is dedicated to St. Mary, patron saint of Speyer ("Patrona Spirensis") and St. Stephen is generally known as Kaiserdom zu Speyer (Imperial Cathedral of Speyer). Pope Pius XI raised Speyer Cathedral to the rank of a minor basilica of the Roman Catholic Church in 1925.
In 1981, the cathedral was added to the UNESCO World Heritage List of culturally important sites as "a major monument of Romanesque art in the German Empire".
Autor: polish.bot o 9:50 AM