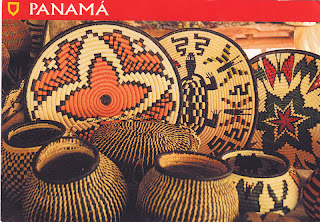 When I published this blog in the Internet I put the link on my Facebook, asking if anybody wants to send a card to me. My friend from Panama, whom I got to know in Sweden, asked about my address and we exchanged cards. She received mine after 3 months, I got her one after less than one month. We were so shocked, she had already wanted to write on it 'Merry Christmas'... ;) 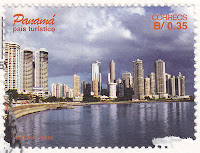 the northwest, Colombia to the southeast, the Caribbean Sea to the north and the Pacific Ocean to the south. The capital is Panama City. Explored and settled by the Spanish in the 16th century, Panama broke with Spain in 1821 and joined a union of Nueva Granada, Ecuador, and Venezuela – named the Republic of Gran Colombia. When the latter dissolved in 1830, Panama and Nueva Granada stayed joined. Nueva Granada later became the Republic of Colombia.
Autor: polish.bot o 12:56 PM

Email ThisBlogThis!Share to TwitterShare to FacebookShare to Pinterest
Etykiety: from friends, Panama